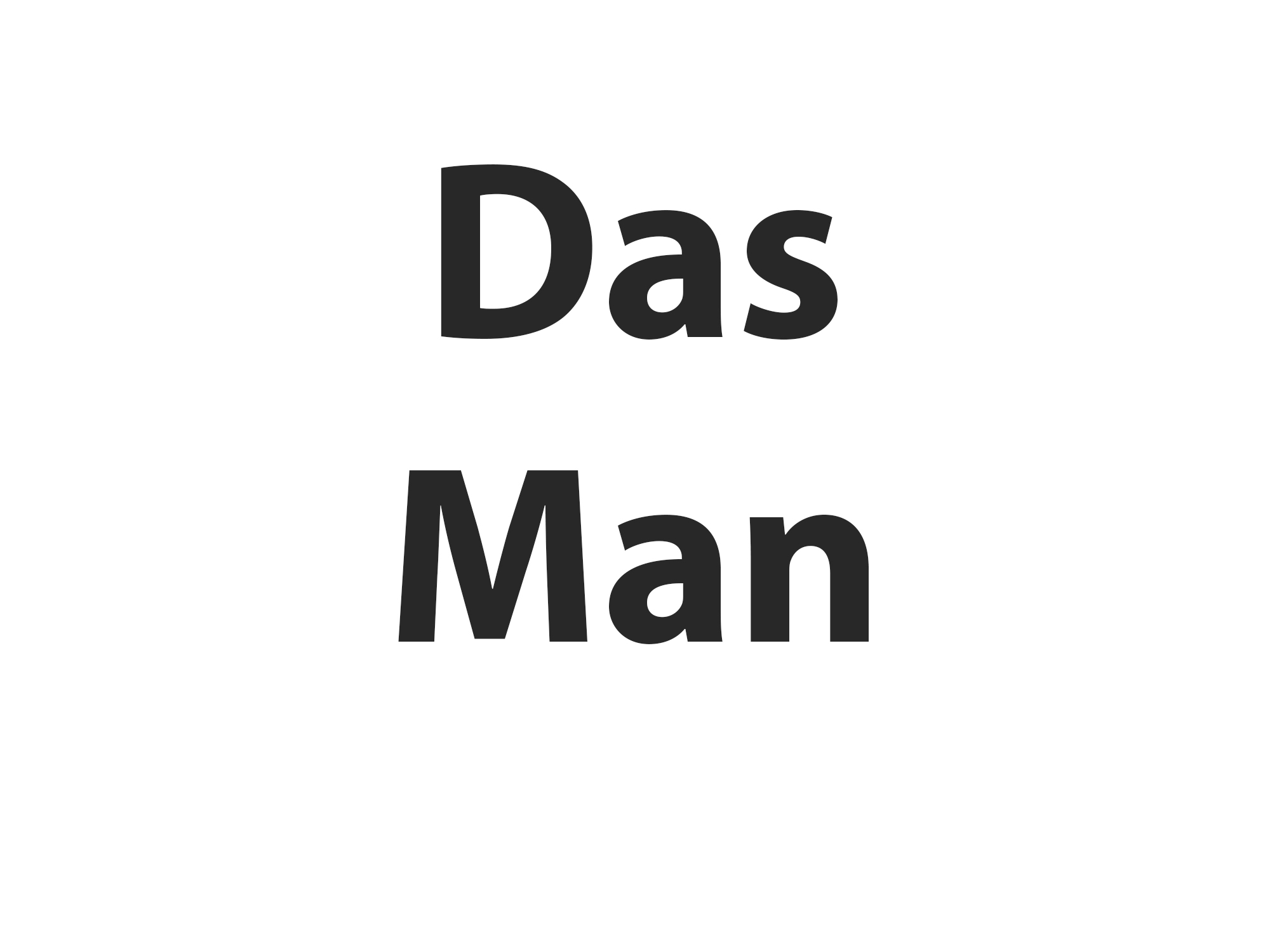 There Is No "They"

From Twitter conversations to speeches at rallies to comments in reading groups to analyses written in magazines and pamphlets, I continually notice that statements about structural oppression begin the same way: They. They want us. They try to. They hate. Always They, and always with a capital ‘t’.

This is a slight change from political discourse in the past few decades. Then, it wasn’t They but Corporations, The Man, The Media. Of course, the change is one of style, though not much more: who else could They be but these same entities? When discussing political issues, especially broad ones, we still fall back to metonymy and use these specters of oppression, domination, racism, and exploitation as the representatives for all evil, as the source of everything wrong with the world today. To hear someone rue The Man for his power today sounds quaint, anachronistic: even when the sentiment of these declarations fall in line with our politics, even when the source of the statement is someone from that time we admire and hope to evoke in our own work, the manner of speech sounds almost hollow because we know The Man is not our political enemy today. So we’ve fallen back to the saying They, couching our analysis in obscurity.

The problem is that They don’t exist. It should sound just as hollow as any of those other agents we’ve stopped talking about.

This is not to say that there aren’t agents of oppression, domination, racism, or exploitation. Nor is it to say that those agents aren’t often men, corporations, and the media. It is to say that by elevating the source of these political problems into agents in this way is to grant personal agency to impersonal entities. It’s to mistake the nature of the problem we’re facing, obscuring the systemic qualities of oppression behind a veil of particular agents.

The irony here is that discussing the systemic nature of oppression is now in vogue. It’s no longer just the far Left using the language of systems and structure, but moderate liberals as well. And yet our language discloses a different view of the world.

I see two related issues within this linguistic trend.

(1) Liberals have begun to see the value of viewing oppression, especially racist oppression, through a systemic lens. Though of course they have no real interest in altering the basis of the system at hand, they’ve found that using the language of a systemic viewpoint gives them a way of speaking in broad strokes about social problems. In doing so, they can speak about “social change” in a way that attracts voters by drawing on the insights and critiques made by the far Left over the past decades. In short, liberals are co-opting Leftist language while removing it of its power by failing to deploy it to radical ends.

(2) The Left, especially in light of liberal co-optation, have failed to articulate an alternate view that can actually address systemic problems. As liberals pay lip service to the systemic nature of oppression, using it to pin blame on Republicans, the Left still talks about what They have done. The two kinds of discourse have thus grown closer together, and the far Left’s ability to shed light on different aspects of oppression has been undercut. To say “we must address the structures of oppression” now sounds closer to “we must support Obamacare and raise taxes on the rich by a few percentage points” than it does to ending capitalism, or changing the relations of production, or uncovering the racism inherent in modern society.

The point is that in order to make clear, much less raise support for, the kinds of concrete changes necessary to actually end oppression, we must find a way to talk about its structural nature that doesn’t fall back on bogeymen and scapegoats.

In other words, we must stop talking about capital ‘t’ They so we can start talking about the ordinary they. In our discourse, we must highlight the banal, prosaic nature of oppression. We must see them as they really are: individuals caught up in a larger system, acting in small ways that combine into something much larger than any single individual can usually see, much less control. These individuals are concerned with making a little more money or living in a safe neighborhood or not getting fired, and through those basic concerns, they, as a collective, end up supporting and continuing much broader social problems that they, as individuals, never even considered.

To look at a particular example: American leftists often discuss white-on-black racism as though white people have collectively decided that it would be in their interest to oppress black Americans, or as though there is a conscious desire to see black life devalued. Of course, it does benefit white people, and black life is devalued—but my point is that it seems as though that system is continued and replicated today either above or below white consciousness. That is to say, there is no cabal of white people searching for ways to oppress blacks—or, well, there probably is, but that cabal is not actually the reason for systemic racism in the United States. Systemic racism exists because millions of ordinary white Americans are ignorant of history, are concerned soley with their personal tribulations, are unable to imagine an experience other than their own. And they are that way because their parents were, and their parents before them, and so on.

This is not to defend racist Americans; it’s to specify in what way they commit their crime. Their racism is constituted not by conscious effort, but by inheritance from a socio-cultural imaginary that blinds them to the realities experienced by other peoples and the reasons those realities exist.

Talking about oppression, then, with language that implies that They (racists, white Americans, or however you define Them) have created this system installs them as agents of a thing they often don’t even know exists. As a result, our discourse is responding to the wrong kind of problem. When we say, “They want to keep black people poor so they can make more money” or, “They want to make sure blacks and poor whites fight so we can’t unite to take power,” the very people who are most responsible for continuing systemic racism—moderate, middle-class white Americans—think to themselves, “Well, that’s not me.” Our discourse doesn’t make clear that precisely that is the problem: it is the fact that typical, friendly, well-meaning white Americans don’t see their role within the broader socio-economic system that allows systemic racism to continue.

Since Ferguson, many of these well-meaning whites have taken to discussing white privilege or #crimingwhilewhite as a way of addressing systemic issues. But these discourses don’t go far enough. These terms and hashtags may be a start at an effort to open up a view of oppression that we need, but so far they seem to have ended up merely soothing white consciences more than anything. The discourse of They has become so ingrained that many whites are able to think to themselves, “Since I’m acknowledging my white privilege, I couldn’t possibly be part of Them.”

Oppression exists on the backs of millions of small decisions and opinions, so our political vocabulary should reflect that. We must find a way of discussing oppression that highlights the fact that it replicates itself and ensures its existence by means that are spontaneous and outside the control of individuals and small groups of evil men. Only then can we articulate a pointed response to the problem—a response which has the opportunity to make real change.

←
Branding the Commons
→
To Speak of Race in America